“The President’s Own” United States Marine Band’s mission is to perform for the President of the United States and the Commandant of the Marine Corps. Founded in 1798 by an Act of Congress, the Marine Band is America’s oldest continuously active professional musical organization. Today, “The President’s Own” is celebrated for its role at the White House and its dynamic public performances, which total more than 500 annually.

Auditions for “The President’s Own” occur only in anticipation of projected vacancies and are announced in The International Musician, as well as by direct mailings to college band directors and instrumental music instructors. All auditions take place in John Philip Sousa Band Hall at Marine Barracks in Washington, DC, and are conducted much like those of major symphony orchestras. There is no preliminary taped round.

Interested applicants should send a letter of inquiry with a current resume to: Operations Officer, U.S. Marine Band, Marine Barracks, 8th and I Streets, SE, Washington, DC 20390- 5020, or fax this information to (202) 433-4752. Applicants must travel to Washington at their own expense.

More on "The President's Own" 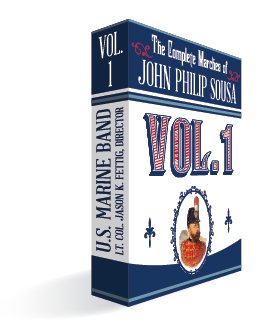 “The President’s Own” United States Marine Band is pleased to announce the release of its first volume of “The Complete Marches of John Philip Sousa.” This multi-year recording project, initiated by Director Lt. Col. Jason K. Fettig, is the Marine Band’s first comprehensive collection of Sousa’s marches since the 1970s. The collection is in chronological order, and Volume 1 contains his first 17 marches, covering the years 1873 to 1882.

Volume 1 is available for free download exclusively on the Marine Band website, along with scrolling videos and PDFs of the full scores that include historical and editorial notes about each piece. Each march has been carefully edited and corrected by Lt. Col. Fettig and Music Production Chief Master Sgt. Donald Patterson using some of the earliest known publications and incorporate performance practices employed by the Marine Band that are modeled on those of “The March King” himself. Click here for details

“The President’s Own” United States Marine Band, in conjunction with the Marine Corps Heritage Foundation, is pleased to announce its annual concerto competition for high school musicians.

The winner will appear as a guest soloist with the U.S. Marine Band and receive a $2,500 cash prize from the Marine Corps Heritage Foundation. The runner up will receive a $500 cash prize.