Aaron Copland was born November 14th, 1900. An Initiate of the Alpha Upsilon Chapter 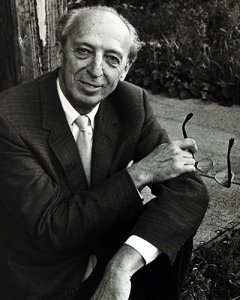 An Initiate of the Alpha Upsilon Chapter of Phi Mu Alpha at the University of Arizona, Copland created a vast portfolio of music that many consider being standards in American music. His career and talent as a composer won him the title “Dean of American Composers,” bestowed upon him by his peers. Pieces such as “Fanfare for the Common Man”, “Lincoln Portrait”, “Rodeo” and “Appalachian Spring” are all standards in describing the American attitude and are just a few that earned him a spot among some of America’s greatest composers. It was because of his influence over American music that President Lyndon B. Johnson awarded Copland with the Presidential Medal of Freedom in 1964.

Alongside a prolific career in composition, Copland served as Berkshire Music Center’s Head of Composition from 1940 to 1965 and was named the head of the faculty in 1957. During the years that followed, he began to turn his attention more toward conducting, making appearances as a guest conductor all over the United States and the United Kingdom. Despite his fame, Copland didn’t stray from promoting other American composers and their music. He was instrumental in bringing performances of new American works and their composers by supporting the Copland-Sessions Concerts in New York, the American Festival of Contemporary Music, and the American Composers Alliance.

For his contributions to American music and his lifetime dedication to promoting the arts, Aaron Copland was named Phi Mu Alpha’s 9th “Man of Music” at the National Convention in 1970.