Archie N. Jones was born on September 20th, 1900. Brother Jones was initiated into 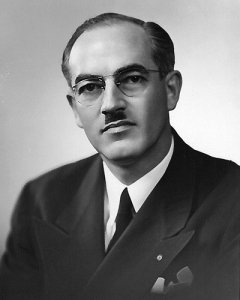 Brother Jones was initiated into the Alpha Mu Chapter at the University of Minnesota-Twin Cities in 1929. Jones was a past National President of Phi Mu Alpha Sinfonia and Dean of the University of Missouri at Kansas City Conservatory of Music. Brother Jones served as Phi Mu Alpha’s National President from 1950 to 1960, holding the record as Sinfonia’s longest-tenured president. Throughout his life, he was a constant and significant influence on the world of music advocacy.

During his career at the Conservatory in Kansas City, Jones was instrumental in the creation of the American Choral Directors Association. In February of 1959, a group of 35 choral conductors from across the country and formed ACDA as a way to promote excellence in the field of choral music through performance, education, composition, and advocacy.

Coinciding, with his active involvement in music advocacy, his tenure as President placed great emphasis on the Fraternity’s role in the advancement of music in America. To honor his dedication to the Fraternity’s Object and contributions to American choral music, Brother Jones was named Phi Mu Alpha’s 7th “Man of Music” at the 1964 National Convention in St. Louis, MO.