Carlisle Floyd was born on June 11th, 1926. Brother Floyd was initiated into 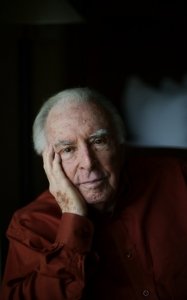 Brother Floyd was initiated into the Epsilon Iota Chapter at Florida State University in 1957. Today, he is one of the most admired and widely performed opera composers and librettists of the last century.

Known as the “Father of American Opera,” Floyd is credited with helping to create an American idiom in opera. His most famous work, Susannah, has become one of the most performed American operas in history. The opera, having debuted in 1956, in 1957, won the New York Music Critic’s Circle Award and subsequently was chosen to be America’s official operatic entry at the 1958 Brussels World’s Fair. Susannah has gone to achieve fame both in the United States and internationally. Other well-known works by Floyd include Of Mice and Men and Cold Sassy Tree.