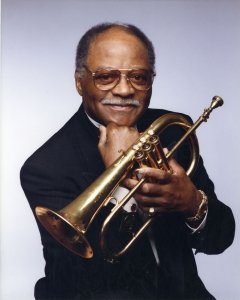 A 1968 initiate of the Beta Zeta Chapter at the College of Emporia, Brother Terry was a brilliant jazz musician, composer, and educator. He played with such names as Count Basie, Duke Ellington, Quincy Jones, and was a regular performer with the Tonight Show Band from 1962 to 1972. Clark is also credited with being one of the most recorded jazz artists in history.

Named the 14th Charles Lutton Man of Music in 1985 at the 45th National Convention, Clark graced us with a special version of his signature piece, “Mumbles,” that ended with “Hail Sinfonia.” He played with an all-star jazz band made up of collegiate and alumni Sinfonians, including Brother John Whitney on piano. It was the first Jazz concert noted at a National Convention, and the original precursor to the 1898 Jazz Orchestra, that is now a regular convention fixture.