Frederick Fennel was born on July 2nd, 1914. Brother Fennell was initiated into 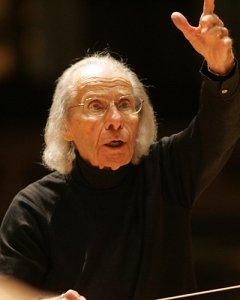 Brother Fennell was initiated into the Alpha Nu Chapter at the Eastman School of Music in 1934. As an internationally recognized conductor, Fennell was one of the prominent figures who promoted the legitimacy of the wind ensemble as a major performing group. During World War II, Fennell would serve as the National Musical Advisor for the United Service Organizations (USO).

Throughout his career, Fennel had been the director of several notable orchestras including the Tokyo Kosei Symphony Orchestra. Noted as one of America’s most-recorded conductors, he made several recordings with prominent wind ensembles such as the Cleveland Symphonic Winds and Dallas Wind Symphony.

For his immeasurable contributions to American music and tireless promotion of musical programs, Brother Fennell was awarded the Charles E. Lutton Man of Music award at the 51st National Convention in Washington D.C., in 2003.