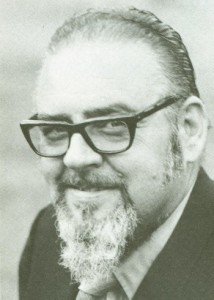 James Clifton Williams was initiated into the Beta Omega Chapter at Louisiana State University in 1946. He graduated from the university a year later with his Bachelor’s of Music degree. In 1949, Williams earned a Master’s from the Eastman School of Music in Rochester, NY. While attending Eastman, Brother Williams studied composition under Bernard Rogers and Brother Howard Hanson at Eastman, and they became mentors and primary influences in his career as a composer.

In 1956 his concert band piece entitled “Fanfare and Allegro” won the inaugural American Bandmasters Association Ostwald Composition Prize. Williams spent most of the latter half of his career as the Chair of the Theory and Composition Department at the University of Miami School of Music. He retained the position until his death in 1976.

The Sinfonia Foundation (known today as the Sinfonia Educational Foundation) commissioned Williams’ symphonic march, “The Sinfonians.” The piece features motifs of prominent Fraternity songs and is widely performed by ensembles of all levels across the nation. The march was first premiered and conducted by Brother Williams at the Fraternity’s 36th National Convention in Cincinnati, Ohio, in 1960.