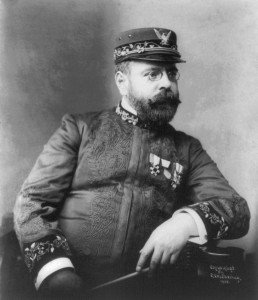 John Philip Sousa was initiated into the Alpha Xi Chapter at the University of Illinois in 1925. Known as the “March King,” Sousa is famous for composing countless marches and his career with the United States Marine Band. In 1868, Sousa enlisted in the U.S. Marine Corps as an apprentice, where he remained for the next seven years. After a five year stint with a theatrical pit orchestra, he would return to the band as its conductor in 1880.

Sousa quickly gained a reputation for being a bandmaster of great precision. After leaving the Marine Band in 1892, he organized The Sousa Band, performing concerts around the world. The band would notably perform at the World Exposition in Paris and the Royal Albert Hall in London. Shortly after America’s entry into World War I, Sousa was commissioned as a lieutenant in the Naval Reserve. During the war, he would lead the Navy Band at Great Lakes Naval Station, donating his naval salary, save a dollar per month, to the Sailors’ and Marines’ Relief Fund.

Throughout his life, Sousa composed 136 marches, including “Semper Fidelis,” which became the official march of the U.S. Marine Corps, “The Washington Post,” “The Liberty Bell,” and “The Stars and Stripes Forever.” Other well-known works include the operettas “El Capitan” and “The Bride-Elect” among several others.