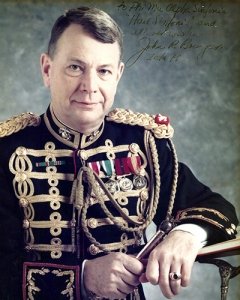 Colonel John R. Bourgeois was initiated at Loyola University New Orleans’ Zeta Pi chapter in 1956. He is well known for his career with the United States Marine Band that spanned nine presidential administrations and serving as the ensemble’s director from 1979 to 1996.

It all began with “The President’s Own” in 1958 when he joined as a French Hornist and arranger shortly after joining the Marine Corps. Later, as the ensemble’s director, Col. Bourgeois was the Music Advisor at the White House. He selected all the musical programs there and directed the band for four Presidential Inaugurations. He regularly conducted the Marine Band and Marine Chamber Orchestra at the White House appearing there more frequently than any other musician in the U.S.

Since retiring from the Marine Band, Bourgeois has been actively involved in music as a guest conductor, has published new editions of classic band compositions, and was named Phi Mu Alpha Sinfonia’s “Man of Music” at the 50th National Convention in 2000.