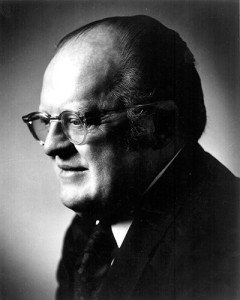 Thor Johnson was a 1932 initiate of the Alpha Rho Chapter at the University of North Carolina at Chapel Hill. In 1947, he was appointed conductor of the Cincinnati Symphony Orchestra (CSO) and was the youngest American born conductor of a major American orchestra at that time.

In 1952, Brother Johnson became the first recipient of the Charles E. Lutton Man of Music Award at the 32nd National Convention in Cincinnati, Ohio. During his time at the CSO, he helped premier over 120 American and European compositions, half of which he commissioned. In addition to his music advocacy efforts, Johnson also founded the Peninsula Music Festival, established in 1952.