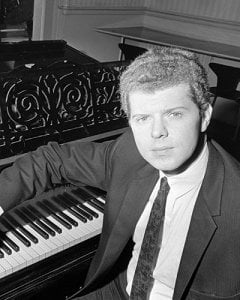 Van Cliburn was initiated into the Alpha Chi Chapter at the University of Tula in 1958. During the same year, he participated in the International Tchaikovsky Competition in Moscow, Russia. In an event designed to demonstrate the technological superiority of the USSR during the Cold War, Cliburn would win first prize. The win propelled him to international fame, earning him the nickname “The Texan Who Conquered Russia” on the cover of the New York Times Magazine. For the power of his musical diplomacy and his influence on the world through the arts, Brother Cliburn was awarded the Presidential Medal of Freedom by President Bush in 2003 and the National Medal of the Arts by President Obama in 2010. Today, his legacy lives on through the Van Cliburn International Piano Competition held once every four years at venues around the globe.

For his contributions to American music and his endeavors in the arts and humanity, Cliburn was awarded the Phi Mu Alpha’s “Man of Music” award at the 1962 National Convention in Cincinnati, Ohio. Cliburn would follow his acceptance of the award with a speech and exceptional performance for the Sinfonian Brothers in attendance, displaying his gratitude through song.

When speaking on the joy of sharing music, Brother Cliburn said, “Its always there, it will be there after you and I and everyone we know today are dead. That music will still be alive.”