Phi Mu Alpha Sinfonia is the world’s oldest and largest secret national fraternal society in music. Sinfonia was born on October 6, 1898, at the New England Conservatory in Boston, when a group of thirteen young men under the guidance of Ossian Everett Mills met “to consider the social life of the young men students of that institution [and] to devise ways and means by which it might be improved.” Sinfonia became a national fraternity on October 6, 1900, with the admission of a group of men at the Broad Street Conservatory in Philadelphia. For over a century, Sinfonians in nearly every field of study and professional endeavor have transformed music in America. The opportunity of becoming a Sinfonian is offered to as many men as possible who, through a love for music, can assist in the fulfillment of the Fraternity’s Object and ideals either by adopting music as a profession or by working to advance the cause of music in America.

Sinfonia’s chief purpose is to develop Fraternity in music.

At the dawn of the twentieth century, an American musician could not advance unless he was European-trained, and music in America was held back by intense rivalry and distrust between musicians and schools of music. In that atmosphere, the nation’s leading musicians founded Sinfonia to promote brotherhood among musicians and revolutionize the field of music. Since that time Sinfonia has been the rallying point for musicians to support each other and music in America.

In every age, the forces of commercialism and ego support music of the most common type, but the promotion of the best in musical art relies on those who are devoted to the principles of excellence and artistic integrity. Sinfonia was founded in a post-Enlightenment age when artists had gained new freedoms to create the music of their own inspiration. Amid the opportunities and influences of a growing music industry, Sinfonians stood for quality and sincerity in music. Since 1898 Sinfonia has been the rite of passage through which musicians have dedicated themselves to advancing the best in music.

Our Founder said “Our business is the making of men,” and the motto for our membership is “the Manly Musician and the Musicianly Man.” We recognize the ancient principle that the only excellent musician is the good man, who gives forth a perfect harmony with the whole of his life. Through a tradition of ritual and symbol, Sinfonia preserves a philosophy of ethics and aestheticism to influence musicians to a higher plane. Sinfonians are devoted to developing character and ideals in ourselves and in our brothers.

Sinfonia is a movement for the betterment of mankind.

In ancient tradition, the indescribable sensation one feels when deeply moved by music was considered a real and direct experience of transcendent Truth, perceived through the forms of expressiveness, power, and beauty. Sinfonians are heirs to this enduring tradition of Truth in music, and our highest charge is to create music with such inspiration, sincerity, and fervor that it provides this experience of bliss and exaltation. We uphold music, not for the sake of music itself, but to uplift our fellow man. Sinfonians wish to instill in all people an awareness of music’s important role in the enrichment of the human spirit.

Sinfonia champions the power of music.

Our concept of Fraternity is not limited to sociability or friendship among musicians, but encompasses the Enlightenment ideal known as the universal Brotherhood of Man. Sinfonia seeks to bring the musician to the full realization that service to music is not enough, but that service to mankind should be the essential thing of his life. We believe that musicians have a particular power – and obligation – to aid and bless society. With a charitable spirit and the power of music, we seek to bring Harmony to mankind.

“Back in the dawn of history in the days of Troy we learn that when the pest rages beneath the city walls it was driven away by music. In Rome 364 B.C. Etrurian flute players dancing through the streets banished the plague which was depopulating the city. The harp cured melancholia as demonstrated in the case of Saul. Melodious sounds were often effective in freeing the victim of demoniacal possession. Pythagoras wrought wonderful cures through the systematic ministry of melody. Many physicians prescribed music for the recovery from madness. The great Galen recommended melodious strains as an antidote for the bite of a viper or scorpion.” – Henry Wood

Central to being a Sinfonian is the belief that the manly musician is one who loves music, not for the sake of music itself, but as a means to elevating others. Through the Ossian Everett Mills Music Mission (MMM), dedicated Sinfonians exemplify this principle as acts of musical service. In keeping with Mills’ deep interest in the social and moral welfare of students, the MMM also instills a sense of social responsibility and charity in the Fraternity’s members. Each year, Sinfonians touch the lives of thousands through the MMM.

The MMM honors the memory of Sinfonia’s Founder by carrying on his work to uplift those less fortunate with music. Mills’ “Song and Flower Mission,” was one of the largest and most well-known charities in Boston at the time, and is one of the first known organized efforts to improve the quality of patients’ lives with music. The MMM was created in 1998 as a modern day revival of our Founder’s charitable spirit and work. Today it is Sinfonia’s official philanthropy and the only ongoing, large-scale service project in the Fraternity’s history. Through this grassroots project, Sinfonians nationwide perform annually for tens of thousands of nursing home and hospital patients. As brothers exemplify the spirit of self-sacrifice, they more personally experience music’s power to elevate the human spirit and grow better as men from helping others.

Ossian Mills devoted himself to uplifting the souls of the less fortunate with the beauty and power of music. In the 1880s Mills had originated the idea of visiting the residents of the Boston hospitals on Easter and Christmas day, and he carried on this charity for over thirty years. Most frequently he took the Flower Mission to the City and Homeopathic Hospitals. On occasions when more participants were available, two separate parties were formed, and visits were also made to Vincent Memorial Hospital, St. Elizabeth’s Hospital, Good Samaritan Hospital, and Massachusetts General Hospital. When two parties were available, the visit to the City Hospital was led by Ossian Mills and the other party was led at times by his brother, Clinton James Mills.

The number of participants in the Flower Mission varied from year to year, but Mills was typically accompanied by ten to twenty students from the New England Conservatory who provided musical entertainment in the form of vocal and instrumental solos (usually on violin, mandolin, and guitar), and by the Euterpe Club of Boston, a small chamber ensemble which consisted of various combinations of mandolins, guitars, violin, cello and bells. Recitations were sometimes given, and the musical entertainment was always accompanied by the distribution of flowers, cards, and good cheer.

The continuation of the Flower Mission was dependent upon the generosity of the public. Flowers that were used in the morning Easter services were collected from churches by Mills and his assistants, and many of the florists who were paid filled orders with an amount of flowers that “far exceeded the amount that the funds supplied would usually cover.” By 1895 it was written that Mills “has now only to announce his annual tour to receive as many flowers as he and his assistants can distribute in a whole day.” Over the years, his Flower Mission gained a reputation as one of the most generous and beautiful of Easter charities and was awaited in the hospitals with much expectancy. As one nurse remarked, “What would Easter be without Mr. Mills, the music and the flowers?” 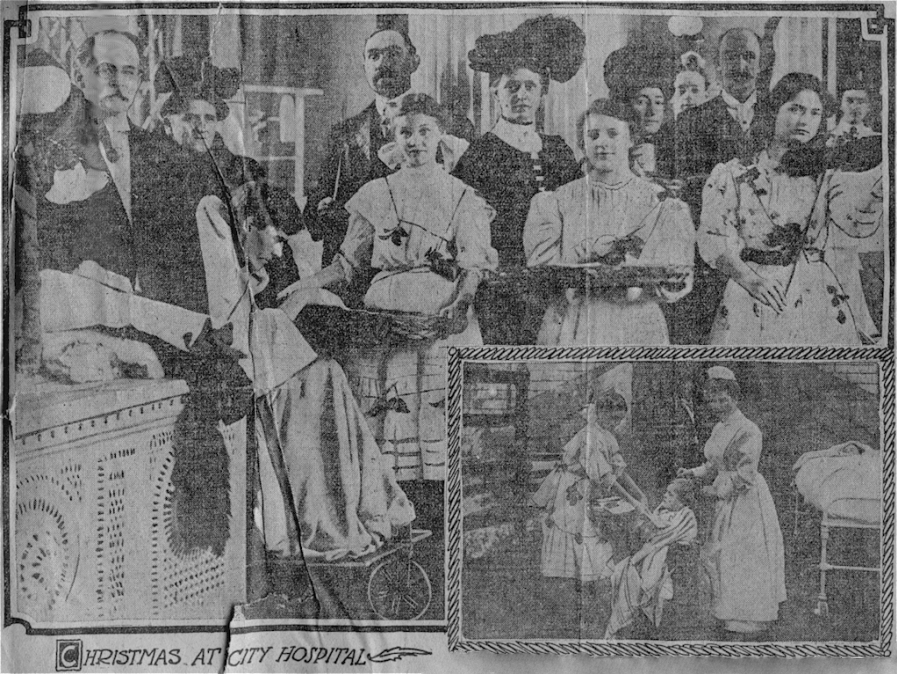 “Easter Sunday witnessed again the beautiful charity that a favored few of the Conservatory students are privileged to dispense, in the annual visit to the city hospitals with flowers and music. About 50,000 flowers were given away, or some fifteen bushels, – enough to supply each patient with a generous cluster. There were pathetic scenes as the flower girls went from cot to cot, for many of the patients were from the streets, poor and discouraged as well as sick, and a kind word, except from their attendants, or a gift of anything so suggestive of beautiful sentiment as a flower, was almost a faded memory with them.”

Sinfonians are called to serve mankind through ideals and music, and the MMM is one means by which Sinfonians unite as a Brotherhood to fulfill this noble obligation. A unique force exists when music and love are combined to bring peace and comfort to those in need, and through the MMM Sinfonians gain first-hand knowledge of that powerful combination. The Sinfonian will find the MMM useful as a practical training ground whereby he may gain first-hand knowledge of that force, as he devotes himself to using it for the uplift of his fellow man.