Earl V. Moore was born on September 27th, 1890. Brother Moore was an alumnus 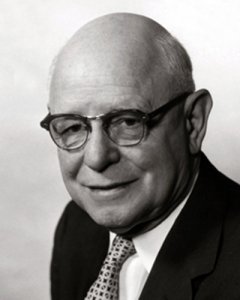 Brother Moore was an alumnus of the University of Michigan and a 1914 initiate of the Epsilon Chapter. As a student, he served as the university organist starting in 1915 and would become a prominent figure in the school’s musical community. Moore served as director, and after a change in governance, dean of the U of M School of Music from 1923 to 1960. He composed several of the fight songs that the University of Michigan Marching Band still plays to this day.

As part of the long-range plans for the development of new land acquired by the university, a new school of music was to be constructed. In honor of Moore, the new building was named the Earl V. Moore Building and still stands today. When the building opened its doors in the summer of 1964, a special ceremony bestowed honorary degrees on Leonard Bernstein, Aaron Copland, Alice Saarinen, and Earl V. Moore.

For his significant contributions to the University of Michigan and dedication to America music, Brother Moore was named the Fraternity’s 3rd “Man of Music” at the 1956 National Convention in Cincinnati, Ohio.