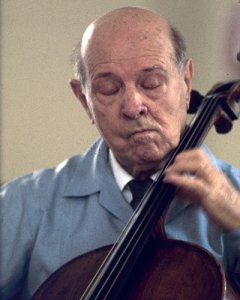 Casals was initiated into the Epsilon Iota Chapter at Florida State University in 1963.

A world-renowned cellist, composer, and conductor, Casals was named Phi Mu Alpha’s Man of Music in 1973. He founded the Prades Festival and served as its first music director. Casals wrote many oratorios, symphonies, masses, choral works and string quartets but is perhaps most well known for his recordings of the Bach Cello Suites.

Also an internationally renowned political figure, Casals was a voice for human rights. In 1963, he was awarded the Presidential Medal of Freedom by John F. Kennedy and was quoted as saying,

“This is the greatest honor I have ever received in my life. Peace has always been my greatest concern.”

In 2000, the Pablo  Casals International Cello Competition was created in his name to help discover and further the careers of future elite cellists. His legacy still lives on today through competitions and venues in his namesake, and his passion to sew harmony amongst all through his music.