After the Fraternity moved into the property at 10600 Old State Road in Evansville, Indiana, the next month was spent remodeling, decorating, landscaping, installing a road sign, and getting the staff settled into place. 50 years ago, today, on September 18, 1970, a small reception was held to announce the formal opening of the National Headquarters.

The reception was hosted by then-Executive Director, Alan Adams and newly elected National President Robert Soule. Staff members greeted guests, and conducted tours to show Brothers, dignitaries, neighbors and friends of the Fraternity the fully furnished and professionally decorated rooms of the National Headquarters. Indiana Congressman Roger Zion made a special appearance and was greeted by Adams and Soule. Other guests included LeRoy Offerman (1938), charter member of the Gamma Delta Chapter at Murray State University, and Jeff Lindquist (1968) and Larry Lyles (1967) of the Epsilon Upsilon Chapter at the University of Evansville.

The formal opening marked a milestone in Phi Mu Alpha’s 72-year history as the first time that Sinfonia had established its own permanent National Headquarters.

Since 1970, thousands of Brothers have come to visit the place Sinfonians call home. The staff has grown and changed in function and role over the past fifty years, as a permanent headquarters allowed Sinfonia to expand its programs and offerings. And though additions and renovations have changed Lyrecrest throughout the years, it remains a “home away from home” for Brothers across the country, and a fitting symbol of our Fraternity’s endurance and legacy.

Have you ever been to Lyrecrest? Share your favorite memories of a visit you made to the National Headquarters by posting stories and photos with the hashtag #Lyrecrest

A Glance at the Last 50 Years 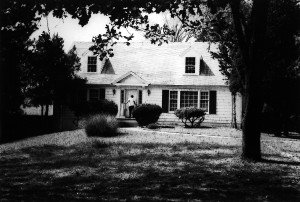 On July 9, 1970, Alan Adams (Theta Iota -1961), who replaced Price Doyle as Executive Secretary in 1967, began the negotiations to purchase a property on the north side of Evansville. The property located at 10600 Old State Road included a  five-acre estate with guest house, storage barn, garage, a small private lake, an oil well, a three-story house, and purportedly a resident ghost. The move took place on August 14, 1970, making Lyrecrest the first established headquarters of the Fraternity. The office formally opened one month later in mid-September. 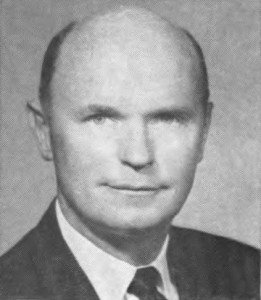 Evidence of breaking and entry and burglary during the night was discovered when the headquarters staff reported for work on Thursday morning, November 12. An unidentified party or parties gained access to the main building at Lyrecrest by breaking a window in the office of Associate Executive Secretary Gerald Bordner (Alpha Sigma – 1952).

Items taken included an electric typewriter, an adding machine, a dictating machine, and a stereo tape recorder. Also missing were such incongruous items as a 50-cup coffee maker, an oak coffee table, stainless steel flatware, dinner plates, and two bed-spreads. Office Manager Mrs. Elizabeth Pigman estimated the loss to be approximately $1,200 (worth over $8,000 today), most of which was covered by insurance.

Several hundred recordings of American Jazz were donated to the National Headquarters after the passing of Mr. Herbert Simpson. The collection was generally acknowledged as “one of the finest in the midwest.” The collection was acquired over more than 40 years of Mr. Simpson’s life and was of importance because it contained recordings that showcased a performer’s artistic and stylistic growth. The collection included recordings by names such as Bix Beiderbecke, Bunny Berrigan, Coleman Hawkins, Louis Armstrong, Charlie Parker, Billie Holliday, Art Tatum, and countless others.

“Every chapter in the Fraternity ought to have the feeling that it owns a tangible interest in our National Headquarters.”
– C. Mike Douglas, President of the Epsilon Upsilon Chapter (1969)

Mike launched a chapter project which resulted in direct benefits for the operations of the National Headquarters. Brother Douglas wrote letters to every collegiate chapter in the country suggesting that the chapter donate equipment and furniture to Lyrecrest, or donate money to cover the cost of items from a prepared list.

Chapters across the country answered the call to help provide furnishing for each room of the new National Headquarters. 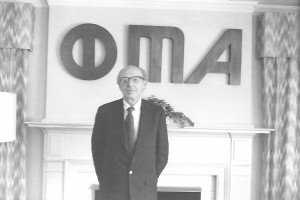 Brothers from across the country were invited to spend an extended weekend at the National Headquarters to aid with landscaping, creating a visitor parking area, cleaning out the pond, and other various projects. Approximately 25 Brothers were in attendance. 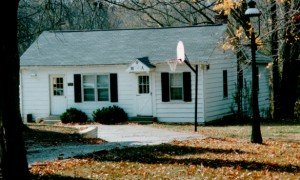 After several years of wishing, what used to be a small caretaker’s residence was turned into a bunkhouse for Brothers to use when they came to visit. The newly renovated cottage was formally dedicated by National President T. Jervis Underwood on January 1, 1991. The building was named for Brother Robert Harris Bray (Beta Mu – 1964), who championed the project and made significant contributions in support of the effort. Since then thousands of Brothers have come to stay in the cottage for a retreat, Lyrecrest Work Weekend, a meeting, or simply when passing through town. 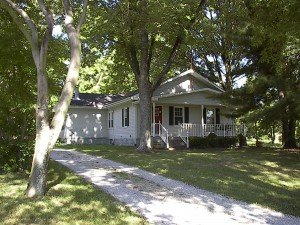 On August 28, 1998, shortly before our Centennial, the Fraternity purchased the property located at 10612 Old State Road. The property is adjacent to Lyrecrest and north of the main office. The property came with a three-bedroom house, a pole barn, a cinder block building, and a detached garage. While the primary reason for the purchase was to protect Lyrecrest from threatened development, the purchase greatly increased sleeping
accommodations and provided an opportunity to house a staff member. 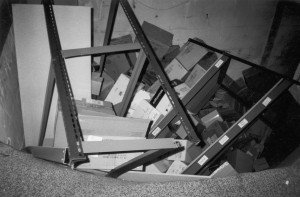 At 12:37 PM on July 18, 2002, a magnitude 4.6 earthquake occurred approximately three miles from Lyrecrest. Reports of earthquake tremors were received by the U.S. Geological Survey from as far north as South Bend, Indiana, and as far south as Memphis, Tennessee.

This earthquake caused thousands of dollars of damage to the property, eventually causing the room containing all the Sinfonia Store merchandise to collapse into the sub-basement. 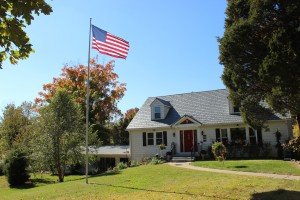 A remodel of Lyrecrest’s Club Room was sorely needed, due to a toilet that didn’t flush properly, poor wiring, leaking pipes, and little or no insulation.  The hand-cut pickled oak paneling on the walls was removed and replaced, the ceiling was raised several inches,  and new wood floors replaced the old worn and badly stained carpet.

“By maintaining Lyrecrest, we not only keep the building intact, but we also pay respect to Sinfonians of the past and present who have worked so hard to get us to where we are today.” – Former Director of Programs, Will Lambert (Iota Alpha -2005) 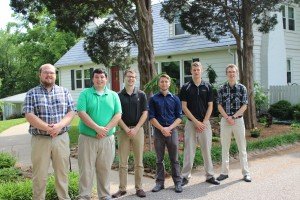 In the summer of 2014, the National Headquarters was able to bring in interns for the second time in its history with the assistance of the Sinfonia Educational Foundation.

Together they assisted with events, cataloging, resource development, scanning chapter files, landscaping, organizing, and other various projects throughout the summer. 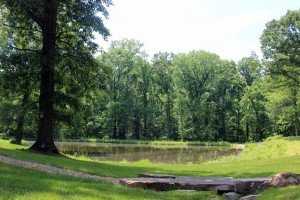 A woodchip pathway and stone bridge were installed between 10600 Old State Road and Lyrecrest North to make it easier for visitors and guests to get between to the two properties.